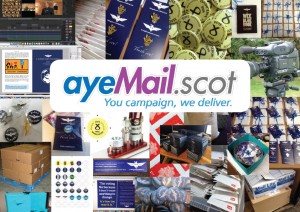 This morning at 10am I crossed my fingers and launched ayeMail’s inaugural crowdfunder on Indiegogo. It was a long-worded pitch, and a big ask for a new venture. At my request Rev. Stu looked over the text and nodded his approval, but we both thought it a bit of a long shot; crowd-funding to help crowd-funders? A tricky sell. Essentially we’re asking people for money so that we can make other people’s crowd-funders cheaper and easier. It’s crowd-funding squared. We weren’t sure people would get it.

Well, as I write these words ten hours later, ayeMail’s Indiegogo page has rocked past £2,046 and 58% of it’s target. It’s trending in their worldwide list of top fundraisers.

The amazing Yessers did it again. The online “45”. The enablers. The people who make it all possible.

A big thank you to everyone who made the first 10 hours so fantastic, and to Rev. Stu for supporting it and tweeting it out to his followers. I just can’t find the words to express how gobsmacked and grateful I am. Thank you.

But we didn’t start this whole thing to wax lyrical about online fundraising, we started it to help the independence movement. So as soon we were reasonably sure that the money was coming (we won’t actually get it for another six weeks, but knowing it’s coming means I can spend what’s in my bank account now) I got on the phone and started ordering equipment. The first badge machine actually arrived yesterday (we had some early backing) and the digital printer arrives on Monday. The guillotine and storage bins we’re scrounging cheap second-hand. So from an idea and a standing start we’ve launched the manufacturing in less than a week. Wow.

Things are moving so fast. You can see what we haven’t even finished the web site yet as there’s a lot of draft text but not much else, and I need to put an ordering system in place. Will we wait for that? Will we heck! We’ve got the gear to get started, so let’s get started.

And this, dear reader, is where we need your help again.

We started this to help pro-indy groups. By definition this includes political parties who support indy. So that means the SNP (obviously), the Greens, RISE, Solidarity, and the SSP.

Now obviously there’s an election on, so there’s some public jousting between all parties as they vie for Holyrood seats – but that’s not actually important. What’s important is we get as many pro-indy voices in the Scottish Parliament – and as few unionist voices – as possible. So for the purposes of helping the movement, as far as this site, this organisation, is concerned, all those parties are the same and to be treated equally. I’m not getting into who’s policies are “better” or the rather misguided arguments about “tactical voting”. It’s quite simple: Support indy? Great, have some discounted badges!

So what we need from you folks, if you can, is to get in touch with your local branch or constituency association convenor for any/all of the above parties and make them aware that this initiative exists. It was conceived of to help them. So make use of it. And remember, if they don’t, their competitors will!

Right out of the gate we’re offering 38mm campaign badges for a flat rate of 18p each with a minimum order of 100, maximum 2,000, plus weight-based postage. That’s break-even for us, and 20-41% cheaper (depending on exact quantity) than the leading UK commercial supplier. They don’t even have to order in round numbers; if they want exactly 207, 523, or 671 that’s fine by us.

Give them our orders[at]ayeMail.scot email address and ask them to get in touch. (We’ll get a shopping cart and online debit card up soon – in the meantime, we’ll do it the old-fashioned way). If they want to see a production sample first, we’re happy to send out a couple of badges of their chosen design by first class post, gratis.

Remember, this service is for them, and other pro-indy campaigners. Whether they choose to use it or not is up to them, but it’s first-come, first-serve in the queue for the cheapest quality badges in Scotland!